Base Certificate of Conformity (COC):

Type Approval or Certificate of Conformity is granted to a product that meets a minimum set of regulatory, technical and safety requirements. Generally, type approval is required before a product is allowed to be sold in a particular country, so the requirements for a given product will vary around the world. Processes and certifications known as Type Approval in English are generally called Homologation.

Compliance to type-approval requirements can be denoted by a third-party marking on the back of the product (e.g. VCA, TUV, CSA), or by a Type-Approval certificate obtained by a manufacturer and kept on file. The CE mark found on the back of many electronic devices does not mean that the product has obtained Type Approval in the European Union. The CE mark is the manufacturer’s declaration that the system/assembly meets the “MINIMUM” safety requirements of all the Directives (laws) applicable to it, and of itself, does not signify any third party involvement in the design or testing of a system/assembly.

Many of the new approach safety directives do not mandate third party involvement at all(e.g. LVD, EMD), and the ones that do (e.g. PED, MDD, ATEX) only require notified body (NoBo) involvement above a certain degree of risk category. When the risk category mandates this involvement, the CE Marking on the system/assembly will be followed by the NoBo number, which right to use is granted by the NoBo after the required design review, testing or auditing, as spelled out in the conformity assessment options of each Directive.

Type approval is not a term confined to a particular industry. Type approval requirements exist for products as diverse as marine equipment, mobile phones, automotive industry, or medical equipment. Type approval simply means that the product is certified to meet certain requirements for its type, whatever that may be.

In the Automotive Industry:

A COC or EC Certificate of Conformity is equal to a declaration of the conformity with the type approval of EC. It is produced to ensure the free movement of cars within the European Union, specifically for those cars that are subject to homologation or registration.

A COC is a producer’s declaration car or motorcycles comply with the given approved type. This document contains information about the vehicle and its producer’s identification, type approval number, other technical specifications. The content of a COC is defined by the European regulation (Amendment IX, Regulation 92/53). Vehicles which do not apply with the EU specification and older vehicles that have not been given the type approval of the EC yet, cannot have an existing COC. Similarly, it is not possible to issue a base COC for converted vehicles; in this case another technical document might help register your car. Only car and motorcycles are eligible.

Certificates of Conformity have been defined in EU’s Single Internal Market and Type Approval Directive (EC-92). EU’s single internal market became official on 1 January 1993. Part of the “EC-92” effort was to remove the technical barriers preventing the free movement of products within the EU market. The greatest impact of this effort has been in the area of standards in the automotive sector. The EU Commission is seeking to harmonise the automotive, technical and environmental standards between all the member states. EU legislation defines the standards in the areas of noise, particle emissions and safety. In addition, the EU’s directive on Type Approval (EU Council Directive 92/53) eliminates the need for national type approval requirements by establishing one set of rules for automobiles and their components throughout the EU. This directive aims at the clarification of the type approval procedure for motor vehicles, separate technical units (i.e., trailers), and components.

It simplifies the documentation, designates the type approval number of a separate technical unit by a certificate of conformity, and defines the vehicles, individual technical unit(s), and component(s). Certificates of Conformity, as specified in Annex IX of EU Directive 92/53, will be required for an automobile to enter into service. For component approvals, an endorsement that is issued under the relevant regulations by the U.N. Economic Commission for Europe (UNECE) is recognised as equivalent to an approval granted under comparable EU legislation. In March 1992, the EU Council formally adopted the few remaining pieces of component-related legislation that are necessary to make the Whole-Vehicle Type Approval (WVTA) a reality for passenger cars. In June 1992, EU member state officials approved the adoption of EU legislation creating a single system for the certification of passenger cars, in turn defining the safety, and other technical, requirements. Legislation established an EU type approval system to replace the national schemes of the twelve member states. In 1996, the EU type approval system became mandatory.

Vehicles with an EU Type Approval can be marketed anywhere in the European Community. Therefore, a vehicle only needs to receive the type approval certification in one EU country in order to be accepted in all of the other member countries. To receive a type approval, products may either be brought to a testing facility or manufacturers may opt to maintain their own testing equipment. Nevertheless, US and EU automobiles still must be certified to this single set of rules by an authorised E.U.Member State agency. A similar system was adopted for the type approval of two- and three-wheeled vehicles, which became effective on 1 January 1994. 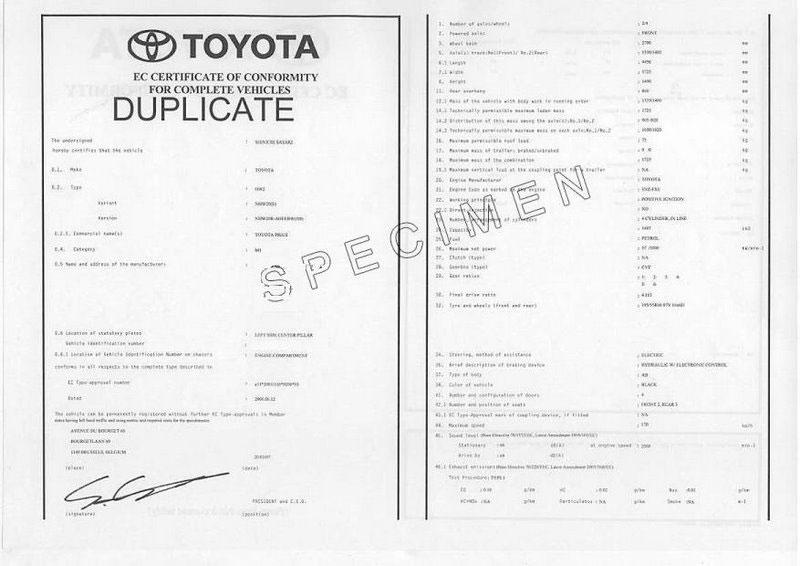