A truck than can automatically drive itself into a bay for loading or unloading could save drivers critical time and reduce the risk of accident or injury, claims the manufacturer. 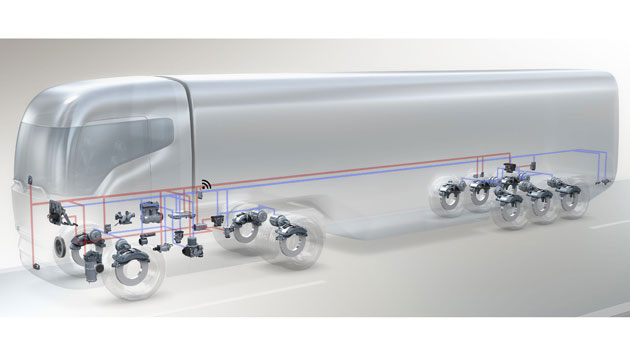 The self-loading feature is among a series of autonomous technologies to be found on Knorr-Bremse’s ‘Future Truck’ concept, which will make its debut at next month’s IAA Commercial Vehicle Show in Hannover, Germany.

The supplier, which specialises in braking, suspension and steering technologies, has brought together its experience of existing driver assistance systems, such as ABS, ESP, active cruise control, lane departure warning and emergency braking systems, to develop its fully automated truck.

Among its most clever features, and one that could use fully-autonomous vehicle technology ahead of it being approved for use on public highways, is a feature that allows it to drive itself into loading bays.

With its on-board environment detection system and the data from various sensors, combined with intelligently networked brake, drive and steering control systems, it manoeuvres itself to and from the loading bay, automatically stopping if danger is detected.

The advantages are that there is less danger of minor damage being caused during complex manoeuvring, and no time is lost because of errors in bay selection. The driver’s time behind the wheel is also shortened, enabling him to take his statutory rest hours or carry out other tasks.

Once autonomous yard manoeuvring has begun, a smartphone app keeps the driver informed of the loading or unloading process, so he only has to return to the cab when the truck is ready to leave the yard.

Other features on the future truck include an automated blind spot alert, which uses both radar and camera technology to alert the driver of other vehicles, cyclists or pedestrians in front, side and rear blind spots. It also features a scalable brake control feature, where the safety systems fitted to the truck’s braking system can be adapted to best suit the weight, payload and dynamic performance of the truck to ensure optimal safety.