With new car sales up 30% for the second year running can the increases continue this year?

The latest figures for new car sales in 2015, released today by car history experts Motorcheck.ie, show the Irish market is up 30% year on year. The industry had estimated total sales of approximately 115,000-120,000 units at the start of 2015 and the final tally has exceeded these predictions yet again. This is the second year running that sales have increased by a factor of 30% as the recovery in the Motor Trade has met and exceeded expectations. 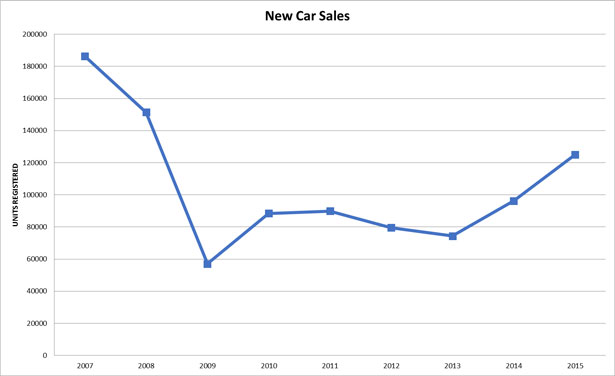 New car sales fell off a cliff in 2009 and despite increases, which were artificially supported by scrappage, in 2010 and 2011 sales decreased again 2012 and 2013 and it’s really only in the last year that the Motor Trade has returned to healthy new car sales levels.

Commenting on the figures, Michael Rochford, Managing Director of Motorcheck.ie said “It is very unlikely that sales this year will reach the levels seen back in 2007, however another year of positive growth is being predicted by the sector. Most of the senior people whom I have spoken with in the industry have said that an increase of 15-20% this year resulting in sales of 140-150k units would be a fabulous result and they reckon its achievable.”

The Light Commercial and HGV sectors also experienced year on year increases up 42% and 9% respectively.

The used market suffered however with lack of availability of good quality used stock continuing to be a problem. Sales of used cars decreased year on year and with the Euro weak against sterling used car imports also decreased by almost 12% meaning the lack of used stock is more pronounced. Commenting on the used market, Michael Rochford (Motorcheck.ie) said “With the economy in recovery supply in the used car market cannot meet demand and as a result prices remain high and the lack of choice and value in this sector coupled with the amazing value being offered by the new car sector has meant many buyers are finding it cheaper to finance a new car rather than a one or two year old new car”.

95.5% of new cars sold were in emissions categories A or B