Three new models recently launched by European manufacturers have been independently tested for safety by Euro NCAP. The Alfa Romeo Giulia, the SEAT Ateca and the VW Tiguan all reached five stars with safety equipment which is fitted as standard throughout the European Union. 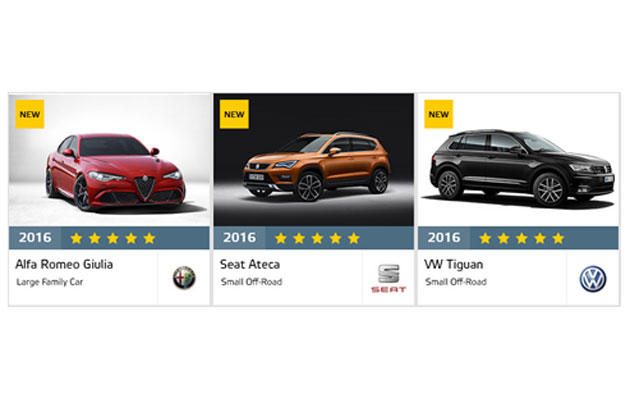 From the beginning of this year, Euro NCAP applied a ‘Dual Rating’ scheme where the default rating issued is based on standard safety equipment available throughout the range. Manufacturers may apply for a second rating, showing the additional safety provided by an optional pack, however, the Alfa Romeo Giulia, Seat Ateca and Volkswagen Tiguan come with superior standard safety equipment as standard throughout Europe.

All three vehicles offer autonomous emergency braking (AEB) systems that help to avoid or mitigate collisions between cars and with pedestrians. Testing of this important safety technology was introduced by Euro NCAP in 2014 for car crashes and this year for pedestrian crashes. The car industry has responded quickly and is fitting an increasing number of models with these life-saving systems.

Secretary General, Michiel van Ratingen, said: ‘Euro NCAP shows what can be achieved when governments, consumer groups and motoring clubs from across Europe collaborate. Together, we can exert an influence on the car industry that would be hard to achieve otherwise. We are glad to see some of the major manufacturers making safety equipment standard across EU28, although we know that markets outside the Eurozone are sometimes less well served.’

Detailed results and crash test pictures of the three vehicles are published on the Euro NCAP website.